In my previous post, I summarized some of the introductory presentations at CICES, the IECA Iberoamerican Chapter’s October 2012 conference in Granada, Spain.  In this post, I’ll focus on a few of the subsequent presentations that dealt with erosion and sedimentation issues in Spain and Latin America.  These were not necessarily the “best” presentations (although they were good to excellent) but I wanted to include examples from several different countries in order to give you readers a better idea of the wide geographical range of professionals working on erosion and sedimentation issues in Spanish and Portuguese speaking countries.  At least 17 countries were represented at the conference.


Olive groves are found in great abundance in the Andalucía region of southern Spain.  We had several presentations about erosion problems associated with olive cultivation.   One was titled “Initiative against erosion through integrated restoration in watersheds dominated by steeply-sloping olive groves in Andalucía” (my English translation).  The authors included some spectacular photos of catastrophic erosion in olive groves.  The principal author, Federico Julián Fuentes, noted that this problem has accelerated since the mechanization of Spanish agriculture took off in the 1960s.  He pointed out that social, economic, legal, administrative, and technical factors are obstacles in the restoration of affected watersheds.  He spoke of the need for a pilot project which would include not only technical studies but also incorporate an action plan supported by the participation, collaboration, and consensus of public administrators, affected farmers, environmentalists, and civic organizations.


There were a number of presentations from Argentina.  “Riparian infrastructure for urban restoration in the city of Tartagal, Province of Salta, Argentina” (presented by Gustavo Arce) focused on traditional structural measures to control slope failures adjacent to a deeply incised river channel in a densely populated urban area.  Throughout its history, the Tartagal River has suffered from floods which undercut steep hillsides causing homes to collapse.  To address this problem, engineers from INMAC, a Buenos Aires-based consulting firm specializing in erosion and sediment control, used geotechnical approaches such as retaining walls (gabions and reinforced concrete) to channelize the river.  My first impression was that their approach was perhaps a bit heavy on large-scale structural controls.  However, in a crowded urban setting, I wonder if this is perhaps a more practical option than an environmentally-friendly and aesthetically-pleasing design relying on bioengineering.


Gino Mathews from Peru gave a presentation on erosion control training for rural communities in the Peruvian highlands. The training aims to take the skills of indigenous people who have a long history of working with earth and rock to construct agricultural terraces and apply these skills to the mining industry.  People from local communities can then become employed in erosion and sediment control for the mining companies from the exploration phase all the way through mine post-closure.  In the process, cooperation between the mining companies and local communities is fostered, indigenous people get good-paying jobs without migrating to cities, and the mining companies can legitimately claim that they are helping local communities and using the skills of local people to protect the environment.  Seems to me like the type of project IECA’s SOIL Fund should get involved with.  IECA can provide skilled erosion control professionals like Gino Mathews to provide the training and the mining companies can provide funding.
Paula Pereira talked about the use of bioengineering for stream bank restoration.  She co-authored a paper (“Protection and Recuperation of Stream Course Margins Using Bioengineering”) describing methodologies used and monitored in the states of Bahia and Minas Gerais, Brazil.  Sediment retainers, wooden fences, and berms packed with live cuttings resulted in satisfactory stream bank protection.  These low cost BMPs were easy to install and environmentally compatible.  Senhorita (that’s Portuguese for señorita) Pereira is employed by DEFLOR Bioengenharia based in Belo Horizonte, Brazil.  Another DEFLOR employee, Luiz Lucena, spoke on erosion mitigation using bioengineering along the Atlantic coast of Brazil.


Ricardo Schmalbach spoke about various erosion control techniques used on the Rio Magdalena, the principal river in Colombia which drains northerly to the Caribbean.  Record floods along the Magdalena during the winter of 2010-2011destroyed large areas of agricultural and industrial facilities, ports, and roads.  More than 500,000 people were displaced and 100,000 are still homeless.  Dr. Schmalbach described the use of “megabolsas” (huge sandbags weighing several tons each) to repair a critical broken jetty along the Magdalena.  Geotextile bags with a capacity of 13.5 cubic meters are filled with sand, dropped into the water from dump trucks, and positioned with excavators (track hoes) to build dikes.


We tend to think of El Salvador as a poor, backward Central American nation.  Thus, it was encouraging to learn that state-of-the-art erosion control techniques employing heavy equipment were used in construction of a new 290km highway in the northern part of the country (“Slope Protection on the Northern Highway, El Salvador” by Oscar Alfredo Rivas Cerna).  To protect cut and fill slopes from failure in the tropical climate, geomat incorporating a double-twist hexagonal mesh attached to a filament-reinforced polypropylene was installed.  It was secured with rod anchors placed in a mortar slurry on a 2-meter-spaced grid across the slope.  30,000 square meters of this mesh were used on slopes which had a high probability of failure.  On another 12,000 square meters of slopes with relatively lower stability hazards, natural fibrous geomat (such as coir) was used to promote natural revegetation.
You may have seen my earlier postings from Bali and Thailand discussing the use of vetiver grass for erosion control.  Oscar Rodríguez Parisca of the Central University of Venezuela pointed out that climate change will bring ecological, economic and social impacts to vulnerable populations in developing countries (“Adaptation to climate change through the use of vetiver systems:  A tool for soil conservation and community development”).  He pointed out that use of vetiver is a simple, low cost option for soil stabilization that is tolerant of environmental extremes and is, therefore, suitable for communities adapting to climate change.  Examples were presented showing applications of vetiver systems to various types of impacts.


Julie Etra (IECA’s VP for International Development) and I were the only “gringos” who spoke at the conference.  Julie talked about the challenges of identifying appropriate best management practices for erosion control and revegetation in arid areas.   For example, revegetation of disturbed sites will often fail unless it is combined with rainwater harvesting to provide adequate moisture for germination and initial growth of native vegetation. 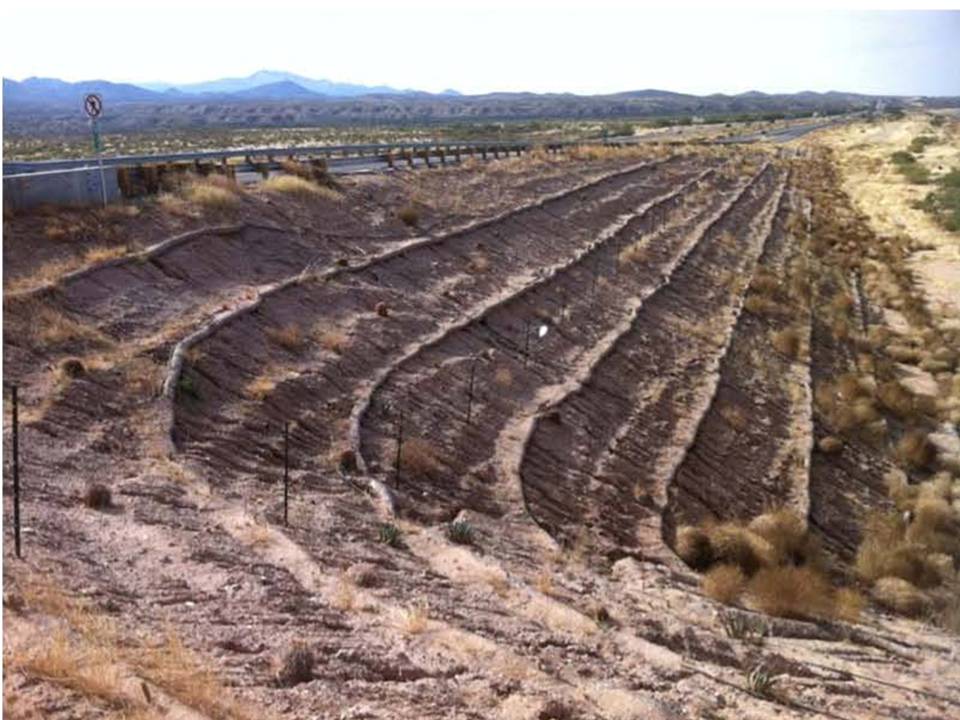 When wattles are installed in low rainfall environments, they are of little use if vegetation plantings have insufficient moisture for survival.
photo by Pablo A. Garcia-Chevesich from presentation by Julie Etra.


Julie had an easier time presenting in Spanish than I did as she had the good fortune of attending a private high school in Spain and now lives part of the year in southern Mexico.  Luckily for me, Julie and Gustavo Salerno (IECA Region I board member from Argentina) translated the English presentation of my erosion survey in Ecuador (including PowerPoint slide captions) into excellent Spanish.  All I had to do was practice it a few times before the conference, and Julie was there for my presentation to help me with questions from the audience.